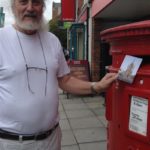 We enjoyed seeing sides of Devizes that normally we would have no time to visit. The Belvedere Woods behind the canal and the Cemetery, its valley formed by the stream that used to dye the silk at the mill. To peek through the gate to the Castle, to meet the assistant curate (a vicar with an L plate) on duty as his vicar was on holiday. All churches everywhere suffer on the falling attendance, and the struggle to attract the young, but the reader of the lessons spoke very dramatically in a Boris Johnson accent and despite his bundling of the dates the curates sermon was good.

Our trip to the sea-side at Weston-Super-Mare was a thorough enjoyment. in 2014 when we visited the Mumbles near Swansea the tide was out, I mean a mile out! So arriving a few hours before the tide came in, gave us a good six hours to watch it come in and go back out, and to lie on the sand in the hot sun. In comparison when we were on the South coast on the way home there was a strong wind that whipped the waves onto the pebbles on the beach, in total contrast to the still scorching sun of the Bristol Channel. When we arrived at the Car-Park, and saw that it was on the sand, we were reassured by the attendance that it was Low Tide and there was no danger of the car drowning when the sea came in. A fishing club had organised a sea fishing contest and we saw later that the fish indeed do come in with the tide. They are only allowed to take home fish over 18 cm. It is called catch and release, and one told me that he and his son had only caught two at 16 cm and one at 15 cm, so no supper!

When the tide was completely in we went for a swim in what one can only describe as gravy. The incoming sea stirs the sand up making a brown mix, and the depth prevented not much more than a quick dip and then the heat dried us off very quickly. What would a trip to the sea without Fish and Chips. From maybe 10 Fish and Chip shops near the beach, the one we chose was opposite the Pier. The cod was huge and the chips overflowed the take away carton, but with the traditional vinegar and salt and even Tartar sauce, it was delicious. To cool off, after the heat of sitting in the sun, we found a cool pub to wash the greasy taste away with a beer and cider. We thoroughly enjoyed being by the seaside and the only light criticism we have was the naked truth of the sugar consumption (layers of fat!) of the nation. Sometimes it was not a very pretty view.

We loved seeing Karen and Norman again. His controlled humour was a pleasure. After hearing the assistant curate and his day of pray for peace, and the upcoming Remembrance Day, it was a contrast to hear Norman describe his flying over Dresden with an ex-RAF Bomber in the seat next to him explaining what targets they had on the day the city burnt. We look forward that they can fulfil their wish to explore our corner of the world and come to Silesia.

Our other big excursion was to Bristol, finally a city whose ‚drive past‘ status has now risen to a ‚must visit‘ status. We parked in one of the four? Shopping centres and went exploring. First stop was St. Peter’s Church, a ruin now used as a gardening centre for unemployed, where they can grow vegetables and herbs, then the floating bridge over the harbour/canal going in the direction of the Watershed Farmers market. Then on the way, slipping through the Saint Nicolas Market similar to the Shambles in Devizes or the Guildhall Market in Bath. Then round the Queen Square Park and off to the Cathedral. Just as grand as Bath, one wonders why successful businesses these days don’t invest in splendid buildings like the merchants of old used to do supporting their towns. Today all you have are different colourful Gromit statues and a ‚Gromit Unleashed 2‘ celebrating Bristol as the birthplace of Nick Park his creator. After the Cathedral we visited the Bristol Museum, always a plus point for the UK as Museums are free. As a supporter of home textiles and our own patterns, it is always a disappointment to see European Museums showing African Textiles, but nevertheless interesting.

Opposite the Museum stands the Falafel House, one of four take away restaurants in Bristol that sell exclusively Falafel, the deep fried round balls made from crushed chick peas and lentils. Like the Fish and Chips in Weston-Super-Mare, huge. We had a choice between £5 regular or £6 large. The flat bread didn’t look very big so we chose 2 large. The girl behind the counter kept filling the bread with sauces, salads, gurken, chillies, and finally squashing the 4 Falafel balls into the middle. After 20 minutes chewing, with our tummies filled to bursting, we wandered out, and headed off to the nearest pub. We had luck to land in a ‚Craft Beer‘ Pub with not only a big choice of local craft beers but also a choice of ciders.

With our tummies full and a small alcoholic refreshment, we landed by the Cabot Tower. After 89 steps climbing we were at the first outlook platform. And with a further 29 steps up a very thin spiral stairway we were on the top of Bristol. Even Prague at 739 miles was signposted. We had wished to visit the Brunel’s SS Great Britain ship but I was looking at the clock, and our 7 hour cheap parking was about to change into a more expensive Day parking so we headed back to the car. The one uncomfortable side of the modern shopping centres sadly is the number of homeless people that camp out on the benches in and around the centres.

This was our first visit to England when we could finally see Craig’s home. I think Father’s love of lists installed in all of us a desire to collect and document. Craig has his pictures, books and magazines, Bruce his models and magazines. Craig’s house is elegant and orderly, Bruce’s suffering from the missing one and a half lungs. Swindon’s vanished prosperity against the cluttered of London’s dormitory towns. Too many people to close together and then Dean’s car managing to get hit twice while he is stationary in traffic. There always seem to be too many people living around London, that I can only describe Awe & Dean’s house as compact.

We had luck to see Mother’s old neighbour Gay on her last visit, picking up a bottle of Sherry for her new home. Nice also to meet her daughter and son. We enjoyed also to have some time talking to Daphne, who has become for us in Germany a classic example of a fine English lady. We have an Irish lady Avril living in Zittau, a small town nearby. We visited once and were served home made scones with whipped cream and jam. This time we could find the clotted cream that was missing. It was nice to see that Devizes small shops, especially in the small Brittocks are thriving and above all selling. The tendency to move the big supermarket to the outside of towns with bigger park places, stifles the town centres and encourages the use of cars. We visited the beautiful Marlborough on the way to Dover, and now slowly Devizes is catching it up as a place to shop. Due to the school holidays, Avebury was also full of visitors, and we even met a lady from Seattle here to attend a crop circle conference. Apart from the slowly ageing population, Devizes gains from being a Swindon dormitory town, with the young families and children that brings with it.

The way home took us through the South of England, Marlborough, Andover, Winchester, Petersfield, Midhurst, Worthing, Brighton, Hastings and finally Dover at midnight. Alena, having shown me a lot of the Czech Republic could finally see another side of England. Winchester is a must visit, and then afterwards we drove past what must have been the Boomland music festival site. Much better organised than the Isle of White festival in the 70’s! In Worthing we got our first breath of the sea, and in Brighton we parked and walked along the Promenade. Brighton a bit like a seaside Bath, with its Regent houses, Crescents and Grand Hotels. The drive along the coast got blogged down in Traffic coming home so we went inland driving around the queues. In Hastings we tanked and saw a well visited Fish & Chip shop. Hard to resist a last meal, and Alena finally got her Haddock, and the curiosity of the server meant we got large chips instead of regular. Again too much food but when one is on the move it is difficult to save doggy bags.

Holland was an eye opener. I have never spent time there, and I don’t remember sleeping there. Staying in the farm of the niece of Alena, we were very much in the ‚horsey‘ side of Holland. Her partner is a big horse fan, owning horses and breeding dressage foals. Alena was in her picking element as they also have pick your own Blueberries, which we enjoyed with Meringues and clotted cream. We went with them to the Dutch WM Centre for Dressage in Ermelo, visited a restored village Bronkhorst, and a middle age town centre in Zutphen. We were able to compare Supermarkets in England, Holland and Germany.

So on Sunday we were able to drive home again in a slowly reducing heat wave which continued into the middle of the following week. With our more land mass Russia Steppe weather and less from the Atlantic here in Görlitz, it takes one or two weeks more before the rain arrives. I have always said that here in Görlitz when you talk about it being the bottom of the barrel, our population are more at the level of the barnacles on the underside of the barrel. The naked truth of the English at the seaside, or the state of the buildings in Swindon, or the big parks of the rock stars in Berkshire, was a nice comparison. When one is on the move, one comes home with a colourful picture of the world we live in. But is nice to cook in your own kitchen, sleep in your own bed 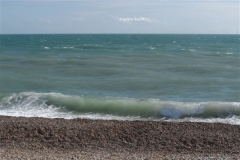 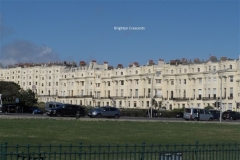 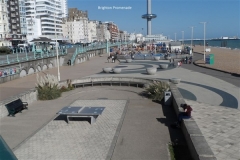 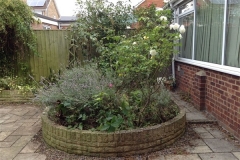 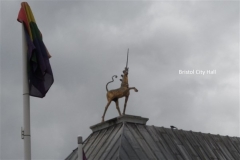 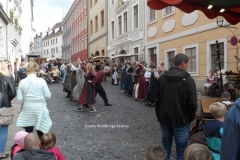 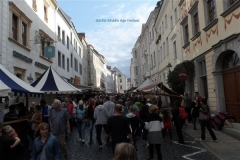 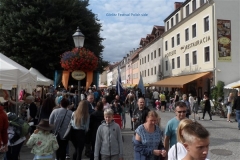 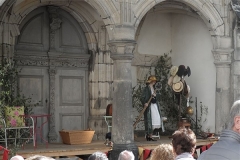 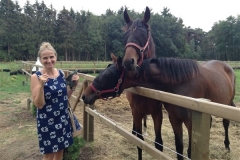 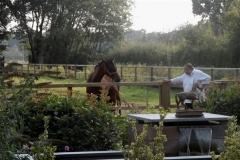 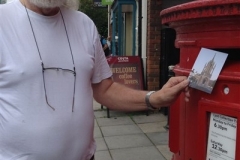 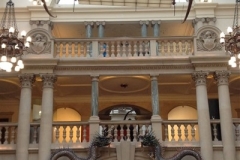 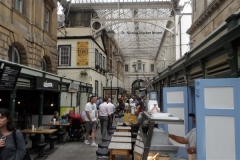 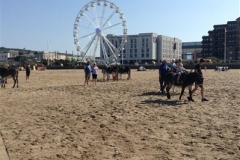 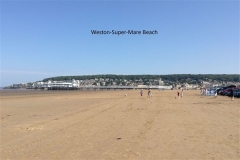 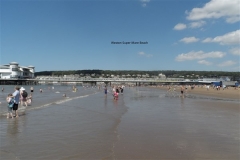 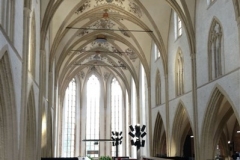 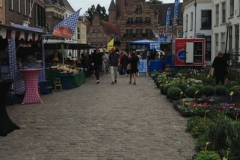